Day 478 In Beijing: Guns and Interviews. 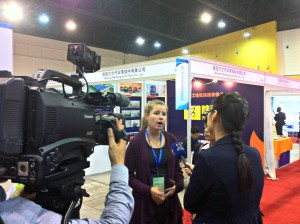 Jill getting interviewed for Shaanxi television!

Jill and I were just finishing our lunch when Sarah, who is responsible for all of the crazy expatriates on this trip (and there were about 200 of us) asked us to do an interview about our company.

The would be for a Shaanxi television station, which is the province that the city of Xian is located in, and a pretty big deal.

We, of course, agreed and thought it would be a blast.

When we were about to start, the interviewer started talking to me and I made sure that they knew that it was Jill’s company and I was her employee and that they should interview her instead.

I guess this is pretty common, almost anywhere, where men and women work together, that the man is expected to be the head of the company.

I’m glad that I spoke up and made sure they realized that women are just as smart, powerful, and can run a company as well as any man.  And, I know from experience, Jill can run one better than anyone else I’ve met and, without a question, about 1,000,000 times better than I could even think of running one.

The interviewer seemed very pleased to interview Jill and they actually did about a 20 minute interview.

I was able to grab a video of it and I think Jill, and her translator Miranda, did an amazing job!

By the way, they did interview me, for a local Xian newspaper, later in the day.  I had to say we both had fun being interviewed and meeting all the nice people in Xian.

I, on the other hand, decided to play with a laser tag rifle at the conference.

It was pretty darn cool.  The idea was to be able to hear the actual “events” going on with the headphones and then fire at the other person.

They only had the guns set up so I was just firing at the guns but the actual laser tag had full gear including armor.

The coolest thing about it is that they actually had, at their manufacturing plant, a 6 foot tall robot that was set up with fully remote controlled laser rifles and directional ability.  In other words, you could hang out, use your remote control, and have this massive robot do your bidding.

You can also sit in the “head” position of it and ride around.

Honestly, this was awesome.

You can see it on the poster beside the gun rack.  Trust me, that thing would be damn scary if it rolled up towards you.