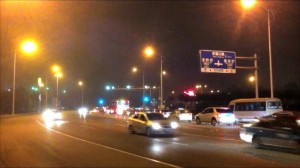 Traffic, and the traffic lights cameras, at the intersection.

Jill, Nuria and I decided to go out to a local Chinese restaurant for dinner.

Tianjin, if you remember, has about 15,000,000 people living in it and yet isn’t really very well known.

It is a second tier city, because of many reasons, and pretty much no one knows about it, outside of China, because it is mostly a factory town.

Expats don’t tend to live here because they aren’t factory workers or middle management.  They are higher up, and therefore, live in Beijing or Shanghai where the business of business happens.

We took a taxi to the restaurant and I noticed that there were loads of flashing lights at the stop light.

I have never seen anything like this so I wanted to get a video of it to show everyone how often these cameras are taking pictures.

We talked to the cabbie, on the taxi ride home, and he said it is to see how busy the traffic is at that moment.

However, in Beijing, since there are too many cars, they have certain days, each week, that you can’t drive.

We asked if that same law applies here in Tianjin and the drive said yes.

So, that means they are also tracking the amount of cars, and the people driving when they shouldn’t be, constantly.

That being said, it was a pretty cool light show.