Day 490 In Beijing: Protests at the Israeli Embassy. 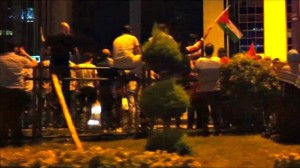 The protest in front of the Israeli Embassy.

Even though it is a few months ago now, there was a major event going on between the Palestinians and Israelis.

As you can guess, Turkey, being that it is somewhere between 95-99% Muslim, was on the side of the Palestinians.

We had no idea, when we were returning from Nate’s house, that we’d drive right by the Israeli Embassy.

All we knew was that we were stuck in major traffic for about 20 minutes or so.

As we got closer to the embassy, we realized that the flags were Palestinian and the people were chanting slogans, which we couldn’t understand, but we got the idea.

There was no violence or discord, other than people speaking their minds, and I can only imagine what these people think about the situation in the Middle East.

I can only imagine it is very different than most people in the USA, and definitely different from people in China.

The one exception might be in Xinjiang, which is the Uyghur and Muslim region of China.

Our ex-roommate, Gulzar, was from Xinjiang and told us a lot about what is happening to her people, her culture, and her religion and it is sad.

I’ve always disliked when people are subjected to a rule of another country and what this means for the indigenous culture, and this means even in the USA where the native people have been subjected to reservations and their culture being taken from them, and I’m always interested in how people respond to this dilemma.

I’ve often joined protests in my home country of the USA and feel that the freedom of speech is incredibly important and sacred.  Even if I disagree with what you want to say.

We didn’t get out of the cab, since we don’t speak Turkish, even though I would have loved to been a fly on the wall to this whole demonstration and to have seen how it ended.

I’m guessing, from what I could see, it was peaceful and quite reasonable.

Also, I’m not giving any political statements or opinions here.

Just showing a slice of life in another part of the world that most people probably don’t see.