The Golden Gate Bridge as we get closer to Fort Point.

After we finished the Golden Gate Bridge tour, Jill and I head down to the Warming Hut for some lunch.

We took the back way, through the beautiful nature preserve that leads down to Crissy Field.

It is amazing how, just about 100-200 feet away from the Golden Gate Bridge, you no longer hear any cars or trucks or anything but wind, birds, and nature.

It is so relaxing, and wonderful to be able to have places like this after living in Beijing for the last 1.5 years and having to travel for an hour to get to some place that should be peaceful but is full of people blasting music, bumping into you, and horrid pollution in the skies overhead.

One really doesn’t know what it is like to live in a city of 25 million people until one does.

And then one can only be content and happy about pretty much any other place where one lives for the rest of their life.

We know we are and won’t take one minute of it for granted.  It is a luxury that we no longer take for granted.

We sat down in the Warming Hut and had a nice little hummus sandwich.  We did, in fact, get warmed up inside the old barracks as it was nicely heated and just the right temperature for us to enjoy.

After a nice 15 minute rest, we put back on our jackets and headed out to Fort Point.

We knew it would be closed, since it is only open Friday through Sunday, but we wanted to get some landscape pictures and just enjoy the view.  It isn’t often one can see the Golden Gate Bridge from below and we didn’t want to miss our chance.  Just another reason we love being car-less is it forces us to value our time, and choices, much more carefully and think them out since we know it takes a lot more effort to get to many places that others easily drive to each day. 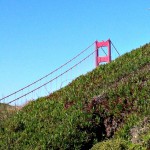 The bridge shot from the recreational area as we walk towards Fort Point. 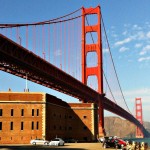 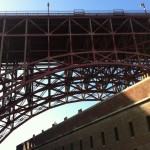 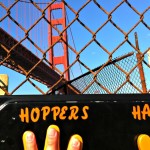 My hand on the Hoppers Hands sign at Fort Point. 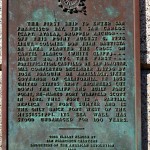 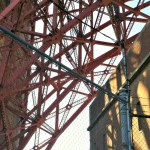 Close up of Fort Point and the Golden Gate Bridge.

Fort Point is only about a 10 minute walk from the Warming Hut and it is right beside the bay so we were able to watch the waves crash and the fisherman fish as we walked.

We arrived at Fort Point, took some pictures and marveled at the super structure underneath the Golden Gate Bridge, which we had just walked upon, and also at the base of the bridge, which our San Francisco City Guide Dan Tussey had told us actually went about 11 stories down into concrete to hold the cables so they won’t shake loose from all the wind, cars and waves.  By the way, the towers are able to move about 12 feet towards or away from each other and the bridge can sway about 27 feet from side to side when it is really windy.  That is some amazing architecture and engineering.  Especially when you consider it was built in only about 4 years and 32 MILLION dollars.  Consider it took 20 years to build the new Bay Bridge and almost 6.5 BILLION dollars.

We got ready to leave when one of the fisherman, who seemed to be new to the sport, was having a bit of trouble.  Another fisherman came over, showed him the right way to cast out, and then practiced with him.  I was able to get a bit of video of it and it was nice to see such camaraderie among people.