View from the parking lot.

We took the bus in and then walked from the drop off point up Columbus Avenue to North Beach.

We were pressed for time, since we had a tour at Anchor Steam Brewery at 1 pm so we knew we’d only be able to stay for about half the 90 minute tour.

Our guide did a great job and introduced us to a lot of the old San Francisco and how North Beach started up with lots of Italian families moved in and started to incorporate their favorite parts of Italy into the USA.

We started at Saints Peter and Paul Church which is located at 666 Filbert.  Jill mentioned this to me and I thought it was rather humorous and a bit of classic San Francisco craziness.

One of the facts that we were told was that Joe DiMaggio and Marilyn Monroe were actually married at City Hall, since the church wouldn’t let them marry there because she had been married before, and then they took pictures at the Peter and Paul Church because they wanted their families to think that they were married in a church.

There has also been a lot of movies filmed here and it has become quite famous.  It was almost empty and we took our time walking around and enjoying the gorgeous interior.

After we left Saints Peter and Paul church, we walked into Washington Square.  There were a lot of Chinese people dancing and exercising here, at 11 am, because they have started coming here to enjoy the day since Chinatown is so crowded and many of the older apartments have very little room.  So, it was fun to watch a bit of Chinese culture that had been transported here and remind us of something that we truly loved living in Beijing.

We saw one man, in particular, doing his exercises alone and then he hugged a tree for about a minute.  It was so comforting and he seemed so happy as he was enjoying his day.  As we walked by, he smiled and waved at our group.

We then moved over to Liguria Bakery, which is famous for its focaccia.  They are also infamous for their family being rude, abrasive and pushy.  It is all part of their way of being and I hope they never change it because San Francisco would lose some real characters.  And amazing focaccia!

We then walked by Joe DiMaggio’s family’s old house and passed a woman who ran a day care company and her little “bus” of kids that were so cute.  Just in case you wonder, we asked permission to take their picture and she agreed.

Last but not least, we went to the parking lot above a police department for some of the best views of San Francisco.  It is also located above the parking lot for one of the mortuaries in San Francisco and I just loved the perspective that this view gave to the shot.  Sadly, we had to leave so we could get to our Anchor Steam tour but we want to go back and do the whole thing as soon as possible! 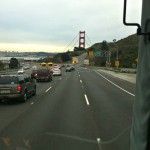 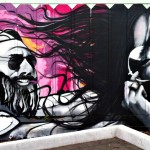 Some graffiti art at the old Tower Record store on Columus of Jerry Garcia and Janis Joplin. 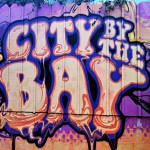 Some graffiti art at the old Tower Record store on Columus. 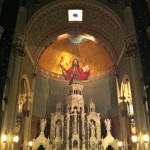 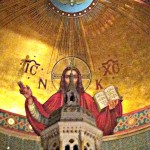 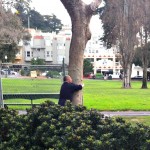 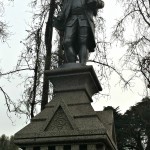 Thomas Jefferson statue. Even though he never came to San Francisco. 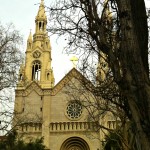 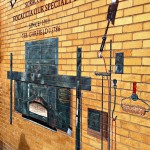 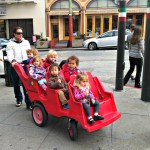 Kids being taken care of and seeing San Francisco. 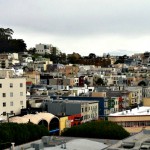 Coit Tower in the distance. 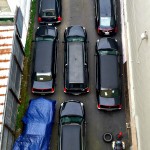