Day 76 in Beijing: The Great Wall of China at Huanghuacheng, Part 1.

Jill, a few other friends, and I went out to see the Great Wall of China yesterday.

The drive out to the Great Wall was gorgeous and invigorating.

The weather was perfect.

I couldn’t have imagined a better day for it.

It was also on a Monday so most of the tourists were at work or somewhere else.

It was truly magnificent.

Even the drive to Huanghuacheng was an adventure.

Our GPS system, one of which was in Chinese and pre-installed in the car, and the second one, which was in English and bought from a store, seemed to have differing views on how to get to our destinations.  It was cultural learning experience and we were waiting to see if they would actually start arguing with each other as we were driving.  We eventually decided to stick with the English one as the Chinese one kept sending us to places that had nothing to do with where we wanted to go.

We also had to dodge piles of sand, stone and dirt that was laid out in the two lane streets as the locals were working on their houses and walls.  We didn’t see anyone out doing anything with them, or any signs warning of this impending danger and suggesting people slow down.  So, it was a bit of a surprise to see these 6 foot tall piles of material taking up a whole lane of our two lane road but we got used to it.

There is a saying that most expatriates seem to say here that fit well, “TIC” or “This Is China.”  Both our Chinese GPS system, and the piles of building materials in the middle of the roads, were great examples of TIC. 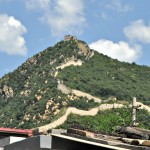 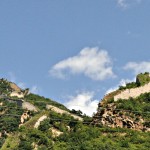 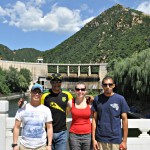 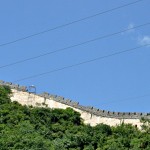 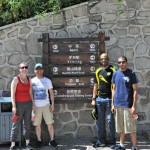 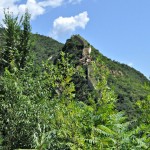 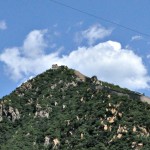 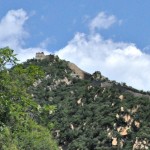 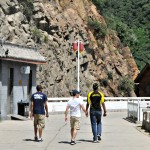 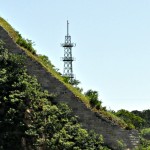 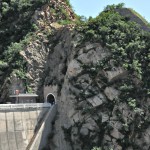 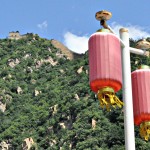 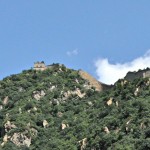 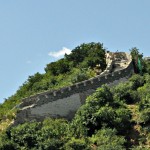 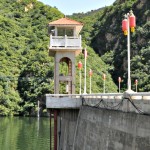 The first part of  wall that we stopped at was at Huanghuacheng.

This is a lesser known attraction because there isn’t as much of the wall to walk on and has been opened more recently.

There is a little village in the valley and they sell roasted chestnuts, traditional Chinese food, and lots of water for the unprepared traveler.

We marched up the first set of stairs and enjoyed the scenery.

The dam that had been built allowed us to take a speed boat ride to the other side where we thought we’d start climbing up to the Wall.