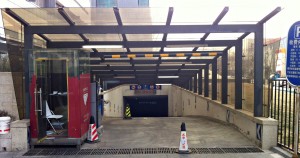 The entry way into the parking area with the guard booth on the left.

There are a lot of guards all around Beijing.

They tend to stand in these tiny little glass booths, with not much else to do, but stare at the world outside and try to not go crazy from the boredom.

At least that is how it seems to be from what I can see.

They do walk around outside the booths but usually not very far and not very often.

This is the guard booth near the parking structure under our apartment complex.

These little booths are in front of a lot of apartments, shopping centers, train stations and other places that “need” security. 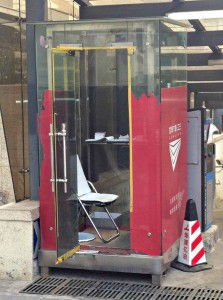 I can’t imagine what it would be like to sit this booth all day long and have very little to do.

I did see one guard who had put newspapers on the ground and stood on it as he read it.

He would step out, change the page, and then step back in to the booth.

I doubt he would have seen if there was any crime committed but it probably helped relieve the boredom.

Also, when it is cold outside, there doesn’t seem to be any heating mechanisms in most of the booths so it would probably be very cold.

Whenever I think my job is tough, all I have to do is look at these guards and what they go through, day after day.