Day 285 in Beijing: Man Behind The Screen. 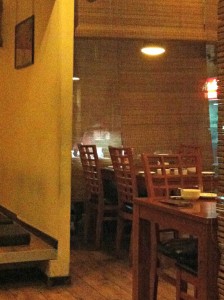 The man behind the screen.

I went to dinner with a co-worker of mine, Magda.

We were having dinner before we went to a weekly meeting of therapists here in Beijing.

I was going to be discussing using behavioral therapy with clients suffering from psychosis.

As we sat and ate Japanese food, Magda received a phone call and left for a few minutes.

I’m pretty sure I was the only person in the restaurant.

So, I just started looking around at the staff and what they were doing.

Most were on their cell phones, talking to each other, and just sort of wasting time until the business picked up later in the evening. 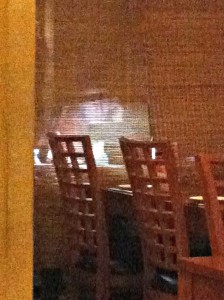 A close up of the man behind the screen.

I noticed this man, who I’m guessing is the owner or manager, working behind a bamboo screen.

He continued to stare at the papers in front of him, seemingly totally devoted to understanding what was written, and barely moved for 5 minutes.

I decided to grab a few shots because his actions were so different than the rest of the crew.

Hopefully it is clear enough to see him through the screen and get a feeling for what he could have been thinking.

It seems, to me, he was quite tired and possibly stressed out from the positioning of his head and his hands.