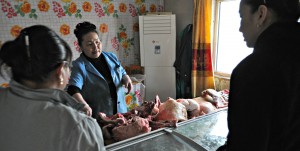 After we picked up the rice, the Mongolian ladies wanted to buy some beef.

Mongolian beef, from what I’ve heard, is amazing.

I’m a vegetarian so I don’t know if that is true but it sells for a lot on the black market in Beijing.

Now, you may ask, how does one get Mongolian beef across the border since it is illegal to take meat, or other perishable products, across them.

This is where a really good driver, and connections, seem to come in handy.

We drove up to a butcher and stopped.

Actually, we drove up to a house, in which a butcher shop seemed to open, and the ladies went in to buy some beef.

Jill stayed outside and rested while I went in to see what was going on.

There was a guy cutting the ribs and a woman selling it.

This obviously was a well known place and the lady knew Diana and these women.

They come here a lot obviously.

After I left the butcher house, I looked around and noticed one of the strangest advertisemnts I’ve seen in a long time.

A huge black guy, and a tall white women, all pumped up and rippling with muscles.

This was on the side of one of the buildings near the butcher house and one of the ladies pointed to it and said, “Gym!”

I’m not sure why a black man, and a white woman, who are seemingly pretty steroided up would help in advertisements, but I guess it does.  Strange.

We hopped back in the SUV and started our return voyage to Erlian, China.

We had to do the reserve trip being that we left Mongolia first, and then headed into China.

It took a bit longer because the Mongolian government really seemed to be searching cars that went back to China and we though the beef, which was hidden under the seats, was going to be found.

Luckily, it wasn’t and we jumped back in the SUV and headed for China.

By the way, after the pictures, I posted a video of Diana and the other women speaking Mongolian.  It is a beautiful language and well worth listening/watching as we drive through, “No Man’s Land.”

When we went through Chinese immigration, it got a bit dicey.

The guards there saw I had a “Z Visa” which is a work visa.  I sincerely doubt ANY person on a Z visa comes to Erlian for a visa run because the company that hired you sponsors you and you don’t have to do these stupid visa runs.

The guards really took along time and were very officious and called over their boss and he kept looking at the Passport and then back at me as if I was some kind of criminal.

They finally let me through and then gave the same treatment to Jill.

After about 15 minutes we were done and waited for Diana and her car by the Rainbow Statue.

After that she dropped us back at our hotel and we hung out until the next taxi driver, which our buddy, Moeava, set us up with, came to pick us up.