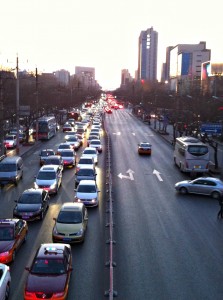 Traffic coming into Beijing on a Friday night.

Traffic can be pretty horrendous.

I’ve heard stories of people who are going home, about 7 miles from town, and  being stuck in traffic for over two hours.

This is a definitely a problem in a city with a population this large.

One of the ways that Beijing’s government is trying to deal with this is having days when people can’t drive.

This means, depending on your license plate number, you can’t drive one day a week.

A friend of mine has a license plate that doesn’t allow him to drive on Mondays.

So, he hires a driver and that driver drives him.

I guess this does take a few cars off the road but when things get bad, they get bad.

I would guess this also impacts the pollution problem quite a bit.

The subway system here is incredible and they keep adding more and more lines so that is helpful.

However, it is often crowded and people seem not to have figured out the fact that when you get in a subway car, you actually have to move out of the entrance for others to fit.

They also don’t seem to understand that if you want to get in a subway car, you have to let people get out first.

I’m sure you’ve all seen pictures of the subways, jammed packed with people, and this is one of the reasons why this happens: People here are not used to being in lines.  It is much like Italy, where people just pushed to the front and you ignore what many people would call “common courtesy” and wait for your turn.  This is infuriating to most expatriates because we often get ignored or pushed out of the way so it becomes a way of life in which Jill and I choose to fit into the Chinese culture and do what they do.

We leave this lifestyle change the second we get on a plane out of China and act like the people we are in the USA and don’t push, struggle or knock people out of our way, when we travel but we believe that to stay sane, we actually have to act like the populace here or we’d get trampled on.

It is not something I like or enjoy but sometimes I just get tired of getting knocked around and so I knock back.

The interesting thing is no one seems to get upset because it is only my belief system that this is wrong.  It is perfectly acceptable in the Chinese culture, at least here in Beijing, to do this.

ps. I’m not judging but the traffic in Los Angeles and San Francisco is much worse than anything I’ve experienced in Beijing.  Just stating something I’ve noticed and I’m quite surprised by this fact.  I think the bridges in the SF/Bay Area cause the major problem and the limited BART service really doesn’t help much.