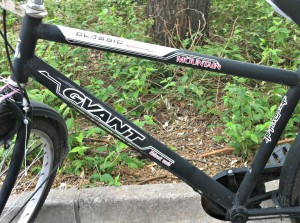 You want to ride a bike? Are you meshuganah?

Not sure if you all know the Yiddish saying of “Oy Gevalt” or not.

“Oy Gevalt” means to basically accentuate a comment or statement.

So, one might say, after seeing a horror movie, “Oy Gevalt!  That was terrifying!”

“Oy Gevalt!  I can’t believe that person jumped out of a plane!”

Of course, mesuganah now needs to be defined and the definition of it is “a strange, eccentric or crazy person.”

So, in case you didn’t know, Yiddish is truly one of the most hilarious languages around, in my humble opinion.

My grandmother, Evie, used to speak it.  Well, let me rephrase that, she used to swear it, when we kids would do something annoying.  She would also clench her fist and bite her thumb.  Yes, this kind of logical response to anger and frustration is a perfect way to deal with it.  It is also why I’m a therapist.

Anyway, this isn’t quite “Oy Gevalt” but it is pretty darn close.

I wonder if this is just the Yiddish version of the Giant bike.

At this point, for your information, I’ve now found 5 different spelling of “Giant” bikes in China.

That is pretty impressive that they can misspell such a simple word and do it so consistently.