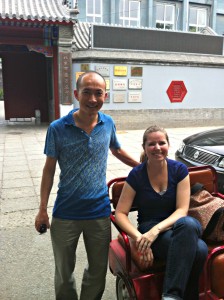 The night before we moved, we borrowed our friend’s Tuk Tuk and took it for a ride around the city on our way home.

People seemed to get a huge laugh out of these two foreigners driving around a Tuk Tuk since there aren’t a lot of us that do that.

So, Jill looked like a lady of leisure who had hired an expatriate to chauffeur her around Beijing.

We got a lot of smiles, laughs and waves from people that saw us and drove past us.

The funniest thing was when cabbies gave us the “thumbs up” when they passed us or we passed them.

They, more than anyone else, seemed to love that we were driving around in the Tuk Tuk.

Honestly, so did we.

In fact, the guy in the picture above came over to us, said, “Hello” and then asked to take a picture with us.

He couldn’t figure out how to get his camera to get all three of us in the picture so he just took one with Jill.

I admit, he made the right choice as she is beautiful.

I then grabbed my iPhone and took the same picture just because it was so silly.

And, in reality, it was so China.