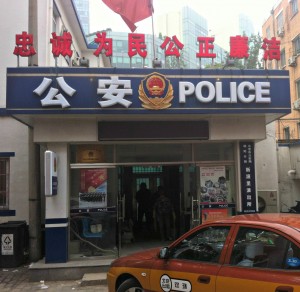 One of the truly silly/goofy/strange things about living in China is that whenever expatriates leave China, we have to register at the police station when we return.

I lived in Japan back in 1997 as a JET program teacher and we had to register where we lived, once when we moved it, but that was it.

This tends to be a waste of time but it is just another one in a very long list of regulations that sort of make me feel like an expatriate and someone that is being kept tabs on.

I’ve never been arrested, been in jail or done anything close to committing a crime.

Okay, not true, when I was 12 I once stole some food from the Mulberry’s in Healdsburg and they put me in a police car and drove me to my friend’s house, who also got caught doing the same thing.

It was just a scare tactic but it sure worked as I didn’t steal anything again.

I think the disappointment in my mom and dad’s eyes was enough to fix that issue.

However, in my defense, I did only take some food that had fallen out of the “bulk food” canisters and had been told, by my wonderful Grandma Evie once that, “If you eat it when you are in the store, it isn’t stealing.”

Yes, she was dead honest and she used to take a handful of the bulk food candy, like chocolate, and eat it and tell me that.

Any questions as to why I’m a psychotherapist?  I think not.

So, I walk over to the police office and hand them my registration.

They are obviously in the middle of rebuilding their office and it is just a mess.

About 10 other people are waiting outside and we are all just doing nothing but using our phones or looking at the sky.

By the way, other Chinese, that aren’t from Beijing, have to register also.  And some of the people, like people from Xinjiang (a mostly Muslim province of China) aren’t allowed to register so they aren’t allowed to go to school or hospitals here in Beijing unless they get clearance.  So, imagine living in California, and then wanting to move to New York, and you not being allowed to do this.  That is what it amounts to.

So, obviously, there are a lot of people living  here that aren’t “documented” and just trying to survive under the radar.

By the way, I ended up getting registered without any problems, but it a bit anxiety producing to not know if there will be problems dealing with the police.  I’ve never had any problems, and they’ve always been friendly, but one never knows.  Just one more day in the life of an expatriate.