Jill had booked a few different tours for us while we were in Cappadocia.

She’d been on one or two of them before and wanted me to be able to share the experience with her.

I usually hate tours, as does Jill, but since she recommended we do these, I trusted her.

The tours were set to only have about 6-10 people in them and to have a guide who spoke English, Turkish and usually another language or two as we’ve found we often got put in groups with people from other countries.

We loved that this happened because we were able to meet more people, from all over the world, who were traveling and enjoy Turkey as much as we were.

One this tour, we met a wonderful family from Colombia.  We all bonded and had a great time talking about the world, what we want out of life, and how to achieve your goals and be content.

We talked a lot and the parents, who are in their late 50s or early 60s, invited us to come and stay with them whenever we visit Colombia.  I grew up in the countryside of Healdsburg and Spanish was spoken a lot.  I was very used to listening to it and speaking it, a little.

When they said, “Mi casa es su casa” I knew that were were like family since it means, “My house is your house.”

We told them that if they ever visit China, or somewhere else we are living, we will extend the same honor.

The daughter, Andrea, and her brother, Camilo, are living in Germany and we became friends very quickly.

It is one of the joys of having small tours in that we can spend time with interesting people, not be rushed, and learn about new places, new people, and share the excitement of seeing something that sparks ours, and their, dreams.

Imagine living in a place like the Zelve Open Air Museum, hidden from the rest of the world, so you can stay safe and not be attacked or killed for your belief system.

And imagine living in a place like this for hundreds of years and it changing from Christian to Muslim through that time period depending on who is ruling the area.

It is truly fascinating beyond belief. 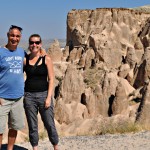 Jill and me in front of the fairy chimneys. 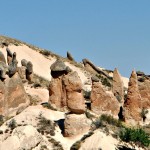 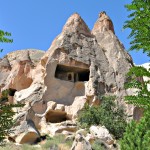 Homes built into the rocks in Zelve Open Air Museum. 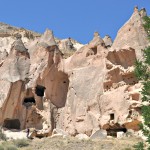 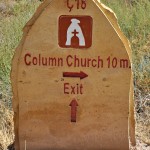 Signs making sure we are headed in the right direction. 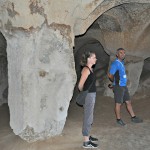 The church that became a winery. 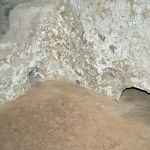 The wine would flow from each room through this tunnel. 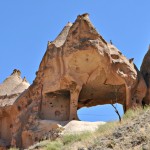 Incredible to think people lived there. 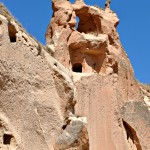 And that people lived here. 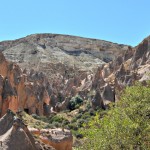 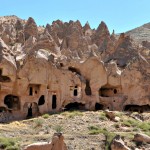 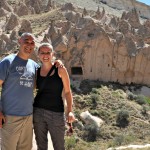 A picture of Jill and me in the Zelve Open Air Museum.