Day 588 OUT OF Beijing: Xinhua has Decided that Bacon is the Cause of China’s Pollution! 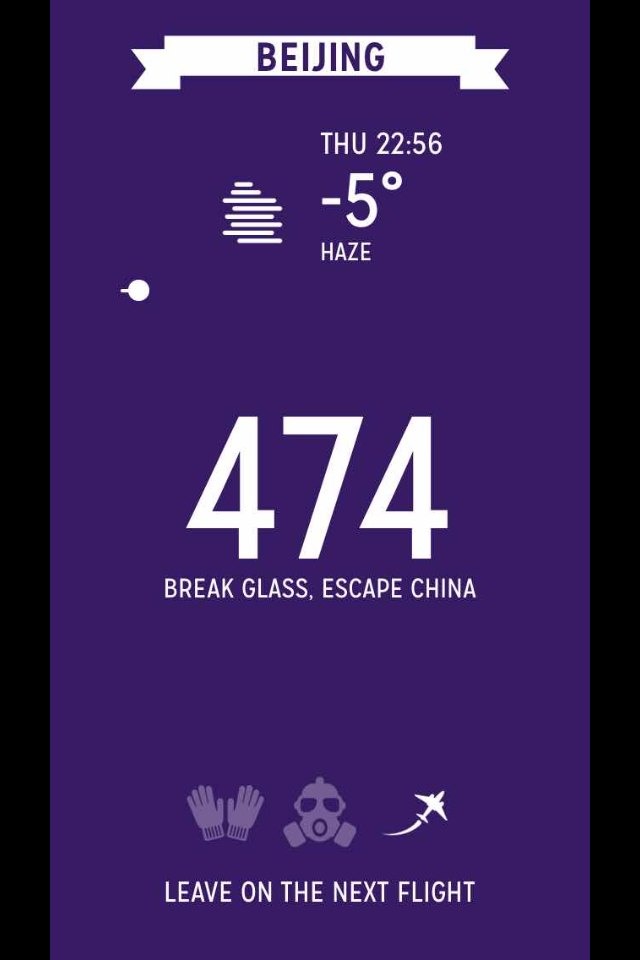 Hazardous to all living creatures.  From the app “Airpocalypse.”

Jill and I still have our WeChat accounts and are in contact with our friends back in Beijing.

One of them, Moeava, posted a wonderful article about the pollution in Beijing a day or two ago on WeChat Moments.  I’ve posted the article at the end of this blog.  For those that don’t know, WeChat Moments is sort of like Facebook’s Wall.  However, you can only see what your friends have posted and you can’t see other people’s posts or responses, if they aren’t your friends.   We wouldn’t want too much free speech or chance of an actual conversations between people, now would we?  This might lead to something called a more free society.

A side point: They’ve made it a felony, punishable with up to 3 years in jail, to have something you’ve posted re-posted 500 times or more.  This means, if something you post gets enough attention, you can go to jail.  Thankfully, I didn’t have enough readers or reposters of my blog or who knows what might have happened.

As you will see, the Xinhua News Agency, otherwise known as the mouthpiece for the government, stated that people smoking bacon is the actual cause of pollution in China.  Xinhua is famous for putting out false claims and absurd facts.  If anyone should be in jail for lying in a public forum, it is the people that own Xinhua and China Daily.

So, just imagine that smoking causes the insane amount of pollution in China.  Maybe it is just me but almost everyone in the rational world would have guessed it is because of too many cars, too much coal burning power plants, or because they keep using dynamite to blow apart mountain tops.  Why, you ask, do they blow apart these mountains?  So they can have more flat land to build apartment complexes that no one will ever live in.  Not that building massive apartments, all over China, might cause pollution from all the equipment used or the cement made to build the apartments?  Nah.  Nope.  Xinhua News Agency has declared it is because of people smoking bacon.

Another aside: China has over 64 million empty apartments, condos and houses right now.

If you think the housing market collapse of 2008 was bad, just wait about 3-5 years from now. and see what happens.  I’m not a Negative Nelly but I have a feeling there will be a housing collapse like no one has ever seen.

There is also massive real estate speculation overseas by Chinese investors.  Take a gander around San Francisco and look at the houses that are being bought, in cash, and you will see what I’m talking about.  One of our friends says a house, on her block in SF, just went for 3.2 million dollars a few months ago to a Chinese buyer.  This house is probably about 2,000 square feet and in a nice district but not worth 3.2 million dollars.

The house has sat dead empty with no renters or inhabitants since the investors bought it.

Of course, the tech money that is moving into SF is part of this but it isn’t enough to fuel it to the degree that it is raising prices.  This is also happening in NYC, Boston and Vancouver, Canada.

Back in China, the extreme wealthy, and the developers are building apartment complexes and no one is renting them out.  The owners and developers seem to believe that somehow, miraculously, the apartment prices will continue to rise and then people will rent them out when they are more expensive.

Being that 70 million apartments are empty and no one is even interested in renting them, I can’t imagine these immediately being full in a few years.

I also worry about the quality of these places.  Apartments that are just a few years old tend to look like they are 20 years old already.  I’ve been in some of the more expensive apartments (including ones that cost more than $9,000 USD a month) and they already look like they need repairs.  They have problems with hot and cold running water, drainage, and fixtures breaking.  I’m glad I didn’t live in a high rise as I’d be worried about them if an earthquake hits in Beijing.  And earthquakes do hit in Beijing.

There are also malls that sit empty, like the New South China Mall and whole cities that are dead quiet, other than a few thousand people, because there is no need for them.

However, the economic needs of the Chinese government push people to move into cities, to buy things they don’t need, and to spend money they don’t have.

Again, it sounds a lot like what happened in 2008 and I’m thinking that history is going to repeat.  I honestly don’t care who buys what, but I’d like to know that whomever is buying actually has sound currency that won’t evaporate the second it is questioned.  Heck, during our goodbye party, one of our friends couldn’t pay for his drinks because the ATM gave him counterfeit bills.  This was directly out of a Bank of China ATM.  And there is nothing he can do about it.

I hope I’m wrong but I’ve seen too many signs that point to this occurring and relatively soon.  Just be careful with your investments and what you are planning.  We could be in for some tough times ahead. 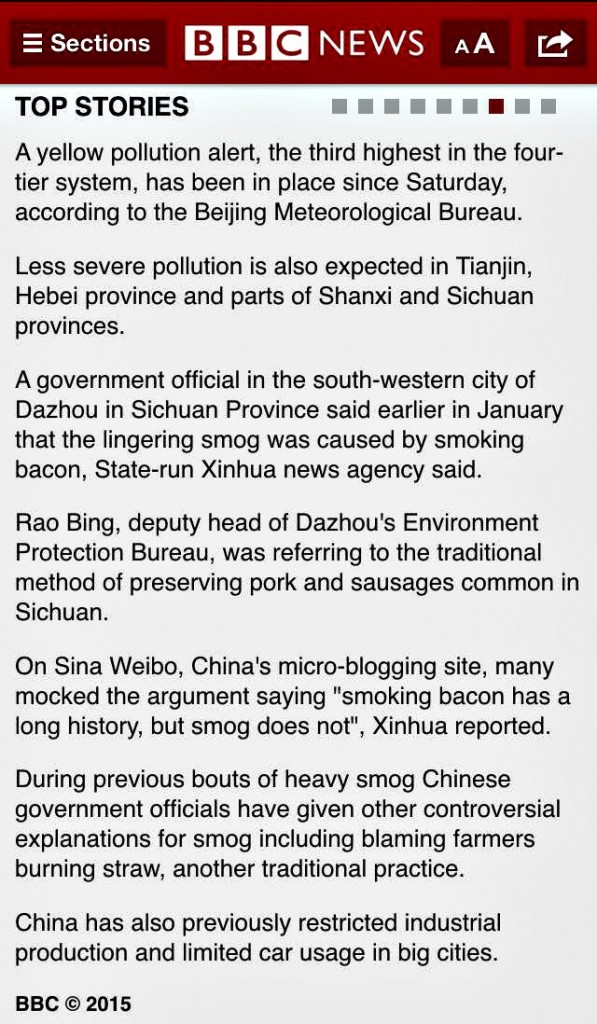 Smoking bacon is the cause of pollution in China.