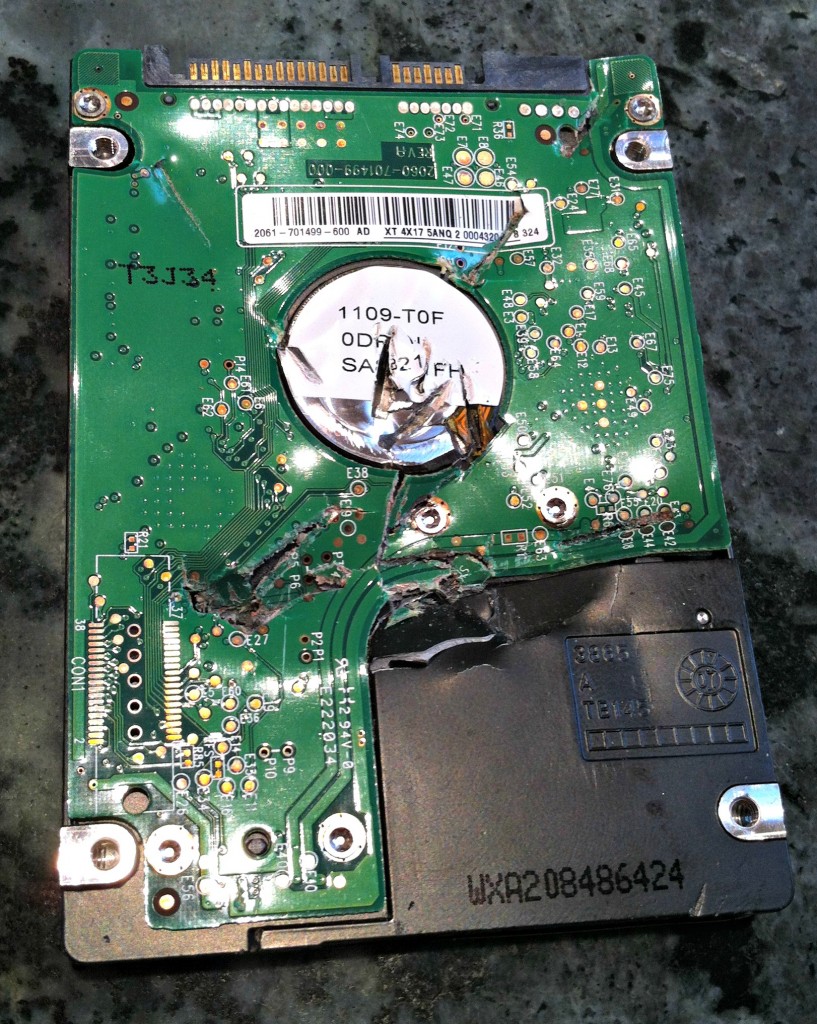 After I used the claw hammer to kill Jill’s hard drive.

Jill had an old laptop and since we are trying to minimize as much as possible, we decided to donate it to charity.

However, I know enough about security, and security breaches on hard drives, that just wiping it clean wouldn’t be enough.

Data are left on the hard drive that can still be recovered when you reformat it.

There are programs that can wipe this clean but I’m still not 100% sure that I trust those either.

Consider that Anthem Health Insurance just had 80 MILLION clients’ information stolen and that is a serious breach in my humble opinion.

I learned, in one of my legal and ethical continuing education classes, that there is a “minimum” number of clients that have to have their information compromised before they report it to the public (and this means you).  If I remember correctly, that number is something like 10 MILLION clients.  That means, if it is less than that, the corporations don’t have to tell anyone and that is 100% legal.  Pretty scary.

By the way, if you are interested in knowing more about security breaches (and as someone who worked in the medical field for the last 10 years, trust me, you want to know more) check out this website and just scroll down the home page to see the constant data breaches: privacy rights.

According to their research there have been 1,012,730,026 records breached since 2005.  Those are just the ones that have been publicly admitted.  That is over 1 BILLION records in just under 10 years.

To put it simply: 1 out of every 6 people on the Earth have had their data breached in the last 10 years.

Look around at your 5 closest friends.  If none of them have reported it, look in the mirror.

Now, this isn’t to make people paranoid, it is just good information to know and for you to think about what you want out there on the web and in your records.

In that same seminar where I learned about this, the presenter stated that about 10 years ago, one health care company, which understood the rules perfectly, would dump their their servers, and the hard drives, in the dump because the total number of each hard drive held just under the minimum amount of client data that would force them to report.  So, they realized they could save a bit of money by basically all of your, and my, information at risk because they knew how to get around the rules.

In regards to privacy, I don’t really trust agencies to have my best interest at heart.  I’m glad to say that everywhere I’ve worked has been as professional as possible.

These companies also include hedge funds, health care, mortgage companies, chain restaurants and so much more.

Yep, restaurants like Chik-Fil-A was breached through their payment system so all of your credit card information, and social security numbers, may be used by someone else.  Of course, if you eat at Chik-Fil-A, maybe that is karma since they are a fairly immoral company from their actions towards equality for all and the LGBTQ community.

All I know is that it is worth being as safe as possible and there are a lot of ways to do this.

I chose the most simple: I let the business side of a claw hammer go to work on Jill’s hard drive.

Yes, I could have recycled it but she has sensitive business information on her hard drive and we weren’t willing to take that chance.

We did recycle the computer, which was in perfect working order, but just too old and bulky for us to use, so that a school or someone else can buy it, put in a cheap hard drive, and have a working computer system.

We also then recycled the destroyed hard drive so that it would be taken apart and reused in whatever way was possible.  It isn’t the most environmentally friendly practice, but it is the best of a cost vs benefits in regards to someone stealing our information.