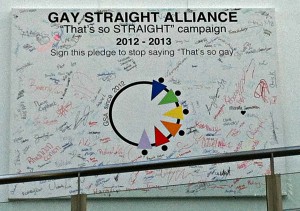 I was at a local school a few weeks back and saw this banner.

As someone that believes in equal rights for all people, irregardless of color, creed, race, religion, gender, or any other reason, I was quite touched by this sign.

I work as a therapist for a reason: I think everyone deserves contentment and joy in their lives and I’ve learned skills and techinques to help people reach both those goals if they want to work hard enough and make changes in their lives.

Nothing is guaranteed but I’m pretty sure that this method can work for most people and seems to work with different cultures and belief systems since there is a large amount of cognitive and behavioral work emphasized, which I would say is primarily Western culture, and then that is balanced out with acceptance, which is an Eastern perspective.

This banner made me proud to be human because I’ve actually talked to kids on the street, back in San Francisco, who would say, “That is so gay!” and mean it as a put down or a negative comment and explained to them why that is hurtful to others and not acceptable.

One would think in the bastion of liberal San Francisco, this would not be accepted.  Sadly, it still is and I hear it much too often for my comfort.

However, my hope is that more people will stand up, explain to others why exclusionary statements such as these are wrong, and the change will happen more quickly.

All I know is I’ll keep doing my part and I’m incredibly proud of these students for doing theirs.